Camouflage Pretzels - The Art in Combination of Flavours

Atten-tion! Auntie Anne’s fans, have you ever imagined what camouflage in food tastes like? Wait no further, as Malaysians favourite pretzel company: Auntie Anne’s Malaysia has recently launched the new Camouflage Festival for their pretzels! Now, you must be wondering, “Wait! Isn’t camouflage often used in fashion? Why is it in my food?!” Well, these pretzels are not meant to be hidden this round. Instead with the same concept, Auntie Anne’s team has come up with the idea to camouflage or basically combine 3 flavours in 1 pretzel! Disguised within each other, these flavour combinations are meant to match well together for your palate. In addition to the combo pretzels, Auntie Anne also brings the whole camouflage experience to another level incorporating camo packaging, further making sure the pretzel blends in with the background. 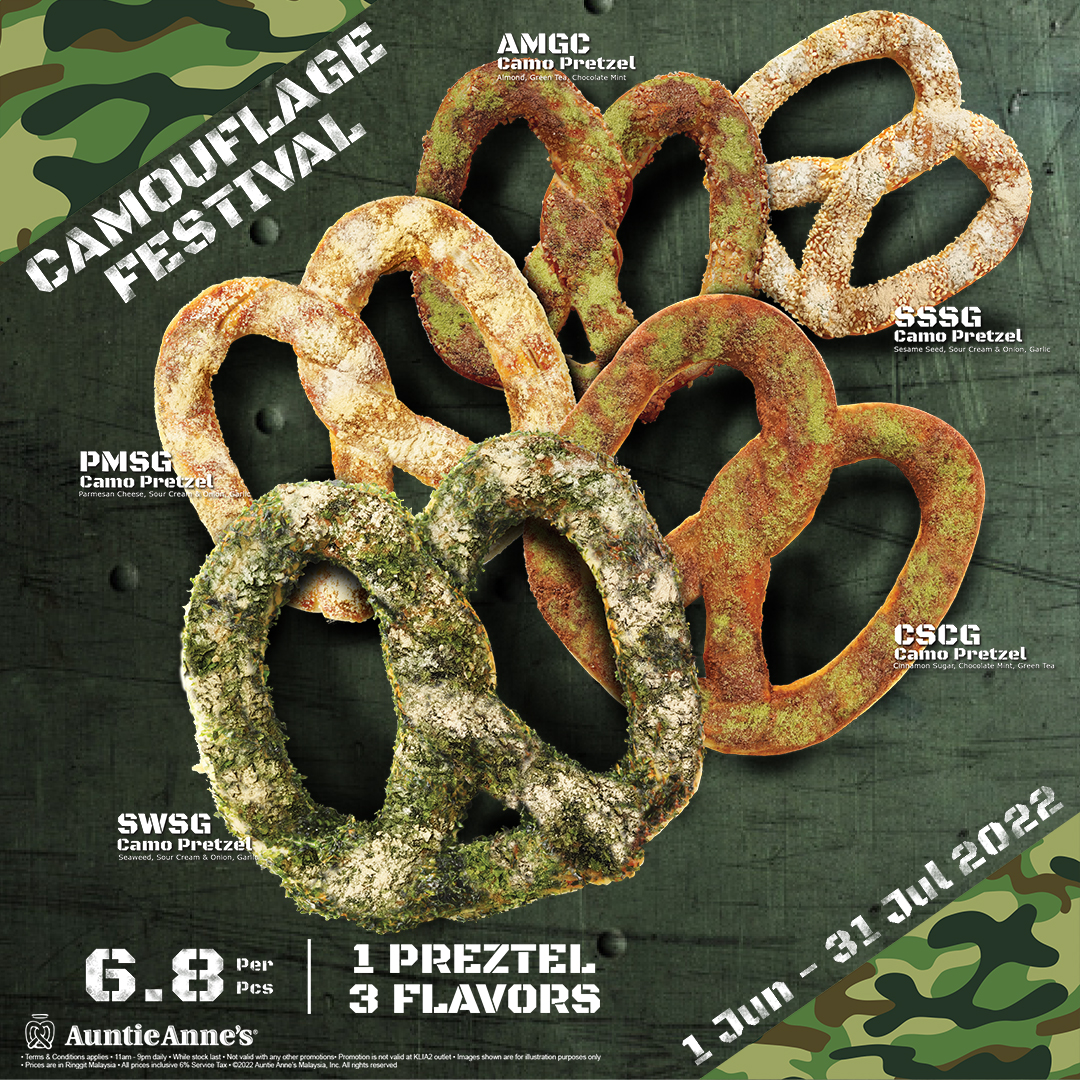 If you have noticed the current trends in the food market these days, on social media, innovating new food combinations has always been a hype. Chocolate powder in instant noodles, bobas in cup noodles, coconut rice with spicy sambal in ice cream and more. As crazy as it is, most food combinations' goal is to tickle your taste buds. This is also the reason why food combinations are such a hype, as consumers don’t just get one flavour in the food, but they get to enjoy another burst of flavours when there’s a combination.

Rather than the pairings of ingredients, it needs to be taken note that when we talk about flavours it is beyond just the tastes but what ingredients are making connections between each other as well as the other factors that affect the flavour. Scents are also important while we find harmony in the food ingredients. For instance, sweet can be better connected with sour or even salty taste. Specially for the camouflage festival, Auntie Anne’s has worked around the combination of flavours within a pretzel. Mainly, the pretzels are based on savoury or sweet. Both these main themed flavours are the choice for Malaysians. All our food is usually based on savoury tastes or sweet tastes. Coming up with five flavours, Auntie Anne’s have the AMGC (Almond, Green Tea, Chocolate Mint) and CSCG (Cinnamon Sugar, Chocolate Mint, Green Tea) in the sweet category for sweet tooths. Meanwhile, for those who prefer savoury pretzels, there is the SSSG (Sesame Seed, Sour Cream, Onion, Garlic), SWSG (Seaweed, Sour Cream, Onion, Garlic), and PMSG (Parmesan Cheese, Sour Cream, Onion, Garlic). The goal is that you will never get bored of the combinations as the flavours camouflage between each other. 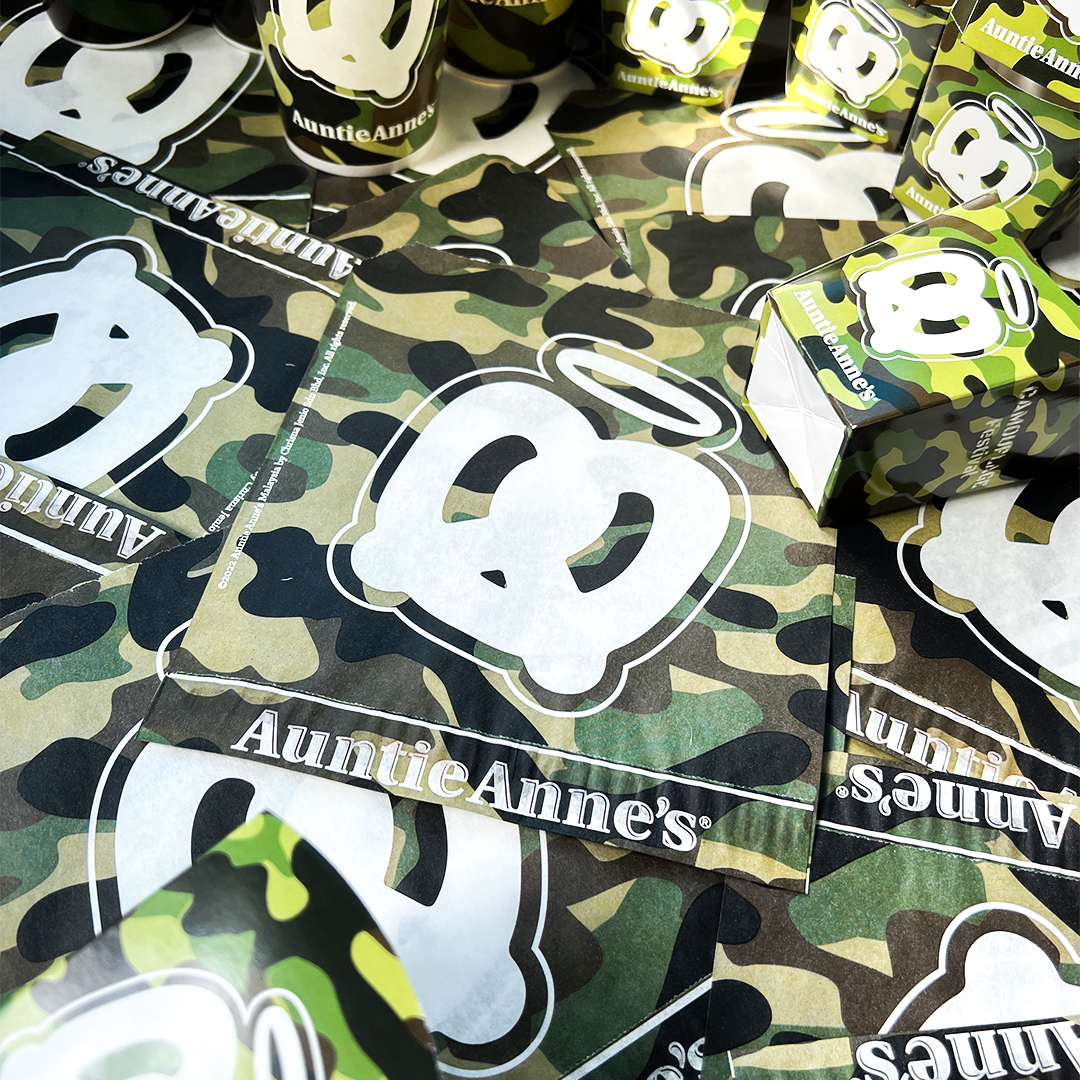 As you can see, the main pairings for sweet pretzels are mainly the chocolate mint and green tea. Chocolate mint has always been the perfect pair of flavours since years ago. Whether in biscuits, chocolate bars, or ice creams, it already has its name on its own. Most of the consumers who like chocolate mint personally love the minty cooling feel in addition to the sweet chocolate. Adding on to this, Auntie Anne’s has added green tea which typically , on its own, has some bitter taste. The green tea helps to balance out the sweetness.

When we speak of sweet taste, even for any sweet tooth, we know some still tend to avoid overwhelmingly sweet desserts as a few bites not only gives you the sugar high but might make you feel sick and tired of eating the food because it is stimulating the same taste over and over again. This feeling tends to happen, when your food is only made up of one sole flavour. Thus, countering this, Auntie Anne’s has added almond or cinnamon sugar to the pretzel depending on your preference. Remember when we said that flavours are beyond just the taste but also other sensory factors such as scents that involve? Almonds and its nutty taste plus crunchy bits are great as an extra sensory stimulation which adds on to the overall burst of flavours. Similarly, cinnamon has a strong unique scent which is also slightly sweet that gives the whole pretzel a unique flavour and countering this issue.

As for those who prefer a more savoury pretzel, Auntie Anne’s has played with its base ingredients a combination of sour cream, onions, and garlic. Literally, what can go wrong with onion and garlic combination? Almost every dish Asians cook has a combination of onions and garlic. Onions on its own are usually sweet plus garlic’s meaty pungent flavour, they carry a combination that is hard to explain. You just know they are a match made in heaven! Topping up with sour cream, the not too overpowering sour taste gives your taste buds some refreshing stimulation. There are three additional ingredients that Auntie Anne has added upon the base flavour. This gives birth to three other variations of the savoury pretzels.

Another flavour to look forward to is the PMSG (Parmesan, Sour Cream, Onion , Garlic), a mix of salty, sweet, and umami taste that’s sure to entice all. This combination itself is actually not rare. However, the SSSG (Sesame Seed, Sour Cream, Onion, Garlic) flavour is a combination to ponder on. Sesame seeds bring out a nutty and slight sweet taste and aroma especially when it is toasted. In Malaysia itself, sesame seeds are widely used in local ‘kuihs’ or also known as local desserts and pastries. Whether it is the Malay culture, Chinese, or Indians, sesame seeds are familiar to all. However, they are usually paired with desserts such as ‘tong sui’ (sweet soup) or paired with red beans. Hence, this new savoury combination is something to look forward to. The last anticipated flavour would be the SWSG (Seaweed, Sour Cream, Onion, Garlic) flavour. The slightly sweet, vaguely salty taste of seaweed pairs well with most savoury, creamy foods. This makes sour cream with a hint of tangy flavour a good pair. Along with that we also have the onion and garlic’s aroma to spice things up. Some may worry that this combination can be a tad salty, but you will never know until you try!

All in all, the camouflage pretzels initiative by Auntie Anne’s is surely to lookout for. With the five flavours for you to try before you find your most favourite combinations give you a variety of taste that can tickle your taste buds and senses. Whether you are having your pretzels for breakfast, lunch, dinner or even as a snack, you know where to get the best pretzels in town! Hurry up and head to your nearest Auntie Anne’s to try out the camouflage pretzels while it lasts for a limited time! You don’t want to miss out on this limited-time festival! Do share with us which flavours you are anticipating to try down below, would love to hear from you.